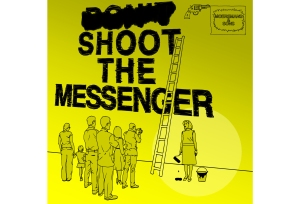 The audience of a performance forms an occasional community. The goal of the assembly is clear: the performance. The codes of this ritual are known as well: the audience enters the auditorium, takes its seat, turns off their phones, mumbles a bit with the other spectators in a hushed voice. When the silence takes over the audience directs its attention towards the imagination and the imagined. All this goes slightly different with Shoot The Messenger. Among the audience are six characters disguised as innocent spectators. They start to stir up things when the ritual isn’t going as expected. They find each other in their collective discontent. While testing each other’s view and opinions they come to a consensus which they sing out loud.

Shoot The Messenger is a co-production by Moeremans&Sons, Productiehuis Rotterdam and De Coproducers, an initiative by Toneelschuur, Theater aan het Spui, Grand Theatre Groningen, Theater Kikker, De Verkadefabriek, Theater Frascati and De Rotterdamse Schouwburg with the goal to support exceptional new theatre and introduce it to a wide audience.